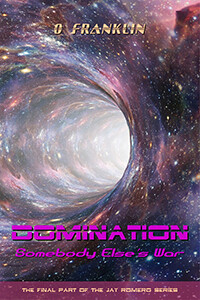 "If you want to live beyond the next thirteen minutes … Do what I say."

Humanoids, droids and a cast of thousands… Stand by for a roller-coaster romp through interplanetary war, epic space battles that bring the future down to earth, relationships that fail, die and come back to life again.

Captain Jay Romero and his friends are now eight years older but 250 years into the future. They are crewing an ageing bulk freighter in the uncharted zone of the Milky Way. Unavoidably, the friends become caught up in somebody else’s war – in deep space. Risking all to go to the aid of unknown creatures, Jay embarks on a voyage of mayhem and disaster that sees his crew mates and himself pushed to their limits. Some don’t come out of it alive.

Discovering that his very existence is the mysterious key to the entire future of the star system, Jay is troubled. He does not want to be a saviour or a hero, but his destiny just won’t leave him alone… The evil Dominatus has one million skeletal Droids standing between the friends and their objective – to save the planet.

Meanwhile, Jay and a group of rebels decide to go after the sinister Inverter. Can he save the star system? Can he alter the future for the third time? Join the crew on board ship and find out. Be prepared for an epic and unexpected voyage…

A Kindle compatible edition of this e-book is available on Amazon and Amazon UK, along with other Amazon domains

Kindle books are suitable for reading on all Kindle devices as well as Kindle Apps, which are free to download to your phone, laptop, tablet, PC, etc

A print-on-demand edition of this book is available on Amazon and Amazon UK, as well as other Amazon domains