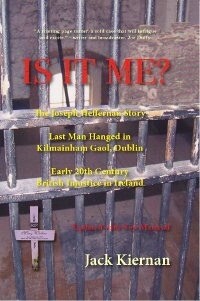 On 4 January 1910, Joseph Heffernan was executed in Kilmainham Gaol for the murder of Mary Walker in Mullingar the previous year. It was a crime that shook the nation and, growing up in the town, Jack Kiernan had often heard local people talk about, even many years later. He was also aware of claims that the wrong person had been convicted of the crime: that Heffernan had simply been in the wrong place at the wrong time and that an innocent man hanged as a result.

When the story re-surfaced in the local press, around the 100th anniversary, he decided to investigate the case himself – as much to satisfy his own curiosity as anything else. What he uncovered raised a lot more questions than answers.

When Jack Kiernan decided to look through the statements and court transcripts from the trial, he discovered a number of strange inconsistencies and anomalies that led him to believe that the verdict that was reached was flawed. In Is It Me? The Joseph Heffernan Story, the author unpicks the evidence that sent a man to his death, speculating on whether his conviction was the result of a sinister plot to disguise the identity of the real murderer. He carefully retraces the events preceding the tragic and brutal murder of Mary Walker, suggesting a shocking alternative scenario.

This edition has been revised and updated with new material that has come to light since the original publication in 2011.

Is It Me? The Joseph Heffernan Story by Jack Kiernan
Non-fiction, Irish history, true crime, murder mystery, miscarriage of justice
216 printed pages, illustrated in black & white with photos and facsimiles, paperback
First published in Ireland in 2011. This revised and updated edition is published by The Manuscript Publisher, 2013
ISBN: 978-0-9576729-0-1