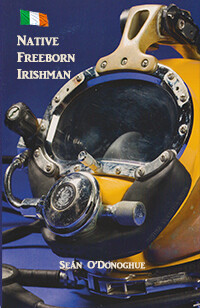 A book about how a deep-sea diver was influenced by the actions of General Michael Collins and others, from tales told to him at his father’s fireside.

The bravery of these men and women inspired Seán to become a deep-sea saturation diver – one of the most dangerous jobs in the world after that of a frontline soldier or a spy. In all his work with divers, over many years, he never met one who was not brave.

Seán O’Donoghue was born in Dublin, in 1958. His training and his work as a deep-sea diver took him to places as far flung as Miami, Florida and Malaysia but, closer to home, he also spent time in Plymouth, England, Scotland and various parts of Ireland. When the Piper Alpha oil rig in the North Sea went on fire in July 1988, Seán was part of the recovery mission and the toppling operation that followed. He suffered Post Traumatic Stress Disorder after that job. Later, he worked at an orphanage in Romania – an experience that touched him deeply.

However, these are just some of the episodes from a life that has been eventful as it has been memorable, learning lessons along the way, including how to always see the lighter side of life and to find courage and strength in the face of adversity. It is related here in the format of poetry, prose, photographs.