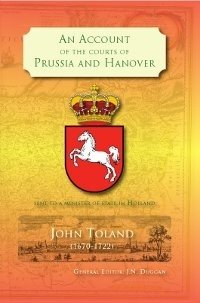 An Account of the Courts of Prussia and Hanover; sent to a Minister of State in Holland by John Toland (1670-1722)

Even after more than 300 years, John Toland's Account of the Courts of Prussia and Hanover remains highly readable and continues to be cited by historians of the period. It gives us an engaging and accessible picture of life in those German courts, and of the people who inhabited them at the turn of the 17th to 18th Century.

Toland travelled to Hanover in 1701, with Lord Macclesfield's delegation, to deliver the Act of Succession to the Electress Sophia. The Act named Sophia and her Protestant descendants as heirs to the British throne, should Queen Anne die without leaving a successor.

Toland was well received by Sophia, who also introduced him to the court philosopher, Gottfried Wilhelm Leibniz. The following year, he visited the court of Berlin, where he was received by the Electress’s daughter, the Queen in Prussia, Sophia Charlotte. His impressions and observations of those visits are recorded in this Account and faithfully preserved in this new edition.

This new edition includes a Foreword, editor's notes, list of Members of the Courts of Prussia and Hanover in 1705, a Chronology of Toland, his life and times.

An Account of the Courts of Prussia and Hanover; sent to a Minister of State in Holland by John Toland (1670-1722)
Non-fiction, European history, Germany, 18th century, travelogue
98 printed pages with black & white facsimile illustrations, paperback
First published in London, England in 1705. This edition published in Ireland, in 2013, by The Manuscript Publisher.
ISBN: 978-0-9576729-1-8