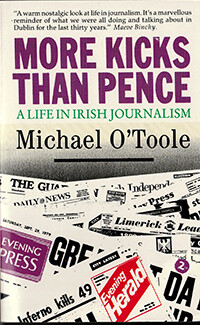 More Kicks than Pence: A Life in Irish Journalism by Michael O'Toole

More Kicks than Pence: A Life in Irish Journalism by Michael O'Toole

A warm, nostalgic look at life in journalism. It's a marvellous reminder of what we were all doing and talking about in Dublin for the last thirty years. – Maeve Binchy

Michael O'Toole started in journalism with the Limerick Weekly Echo and District Advertiser where the chief (and only) reporter drank black rum and Guiness and, which once ran a highly successful series entitled, "How I Cured My Catarrh". He next joined Irish Press Newspapers, where he worked as a reporter, features writer and editorial executive before taking over from the late Terry O'Sullivan as the Dubliner's Diary columnist on the Evening Press.

More Kicks than Pence is his affectionate, personal account of the three decades from the 1960s to the 1990s. When he took up the old black art of journalism, the newsrooms were full of the usual "cheats, scavengers, sycophants, cute hoors and the odd saint too" but, bohemians and eccentrics were much thicker on the ground. There was a man who rode a bicycle to which he had attached a large sail. Another, when drunk, made a habit of prostrating himself like a mediaeval monk in front of the night news editor, begging forgiveness for all misdemeanours "past, present and in the future".

These characters and many more of varying degrees of eccentricity inhabit the pages of this lively and original book, whose author has an unequalled eye for the hilarious anecdote but, who also treats of the serious social and ethical issues of his years in journalism.

He tells his story with impish and good humour. I read it at a sitting … It's a thoroughbred. – Hugh Leonard

One man's honest, humorous inside story of Irish journalism … a funny book by a serious man. – Brendan Kennelly

Michael O'Toole was born in Hospital, in County Limerick, in 1938. He was educated there by the Presentation sisters and the De La Salle brothers and later at the Polytechnic of Central London and at Trinity College, Dublin. He was a news editor and long-time Dubliner's Diary correspondent with the Evening Press. He also worked for the Evening Herald, the Daily Telegraph, RTÉ and the BBC and was Ireland correspondent for The Tablet for a number of years. He wrote and broadcast widely on aviation matters up to his death in April 2000. He is survived by his wife, Maureen.