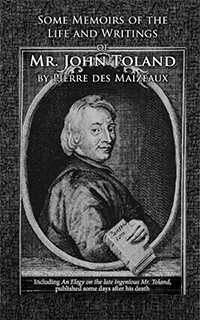 First published in 1726 (as part of A Collection of Several Pieces of Mr. John Toland), this brief biographical account, coming from the pen of a contemporary, is all the more valuable given the sparsity of information concerning the subject matter.

Pierre des Maizeaux was a French Huguenot, living in exile in London at the time of writing. While his original purpose was to provide an overview of Toland's literary output and the various controversies that he became embroiled in, it was "by greatest accident in the world, that I fell into the company of a Gentleman, who had been intimately acquainted with Mr. Toland, and who very generously communicated to me several particulars concerning him."

Students of Toland, the early Enlightenment and philosophy in general will gain a flavour for the times in which he lived, his character, the impression that he made on those who encountered him – both friends and adversaries.

"If you would know more of him, search his writings," Toland said of himself. This account of his life and work will give the reader every incentive to do just that.

Some Memoirs of the Life and Writings of Mr. John Toland by Pierre des Maizeaux
Non-fiction, historical biography, literary biography, Augustan literature
106 printed pages with illustrations (black and white), paperback
Published in Ireland, in 2020, by The Manuscript Publisher.
ISBN: 978-1-911442-31-8