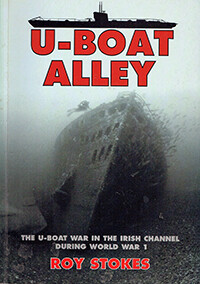 Soon after America declared war in 1917, the unsustainable number of Allied and neutral ships being sunk began to decline. This marked a turning point in U-boat tactics, which resulted in a dramatic increase in the number of attacks against shipping in the narrow seas that separate Ireland and England.

The losses in these new killing zones began to soar and the destruction of vessels soon began to light up the night skies. Naval and air patrols or even daylight hours afforded little protection to coaster or cruiser. With only short distances from the shores, on both sides of the channel, many of the victims were seen plunging beneath the waves.

Mines were laid across the approaches to the ports of Holyhead, Liverpool, The Clyde, Belfast, Dublin and Arklow. The U-boats were fired on, depth-charged, rammed and sunk by the allied warships of Great Britain and the United States. Despite a wide variety of anti-submarine measures adopted by the Allies in the 'Irish Channel', these did not prevent hundreds of sailors and their vessels being blown to smithereens during the campaign to keep Britain supplied.

With infrequent exceptions, the importance of the U-boat war in the George's Channel, the Irish Sea and the North Channel, particularly during 1917-18, has not been historically recognised. Preventing food, men and materials reaching Britain had remained the key to a German victory. The story of the part that Ireland played in preventing Britain from starving during World War I remained untold.

Similar events were largely absent, in the same areas, during World War II and it has somehow become unimaginable that a prolonged naval campaign, involving submarines, battleships and aircraft could have occurred a quarter of a century later. Hardly any folklore of the terrible loss of life and brave actions by ordinary sailors in vulnerable vessels has survived.

It has often been said that a generation was wiped out by World War I. Perhaps this is why no memory remains of the events that occurred in ‘U-boat Alley’. This book tells that story.

Roy Stokes is an author, historian and diver who has been researching maritime history and exploring shipwrecks since 1981.

Other published works include Adventures of the Famine Diver, William Campbell(2021); Between the Tides: Shipwrecks of the Irish Coast (2015); Death in the Irish Sea: The Sinking of the RMS Leinster (1998).

His website, Irish Wrecks provides data on over 15,000 shipwrecks off the Irish coast while Ouzel Galley contains a wealth of stories and information relating to maritime and seafaring in general.