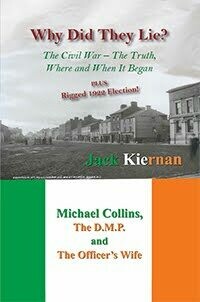 Where and when did the Irish Civil War begin? Most people, with any knowledge of Irish history, would be able to tell you that hostilities commenced with the sacking of the Four Courts in Dublin, towards the end of June 1922. However, most people would be wrong! That is the view of Jack Kiernan, who sets out to investigate the roots of a tragic and bitter conflict, that proceeded apace with the emergence of independent Irish statehood.

Growing up in an Irish Midlands town and being taught Irish History at school, Jack Kiernan remembers being told by his teachers that "if anything of importance happened in Mullingar, it would have been recorded."

Bullet holes remnants in the walls of prominent local buildings seemed to give lie to these bland assertions, as did the recollections of older neighbours, alluding to "the shooting of unarmed prisoners during the Civil War."

What he only discovered, much later, was that events of, not just local but national significance had taken place in the town where he grew up. What’s more, they had been recorded, only to be buried deep within the archives – almost as if they had been deliberately covered up!

The evidence that he reveals here, demonstrates that open hostilities between pro- and anti-treaty forces were already in place throughout the country, prior to the events in Dublin. Furthermore, gun battles took place in the town of Mullingar during the month of April 1922, resulting in deaths. Evidence also suggests that British forces, though officially withdrawn, may have fired the first shots that that set Irish against Irish and brother against brother.

The events of the Irish Civil War (1922-1923) have cast a long shadow over Irish life. This book sheds important light on a dark chapter in Irish history; a contribution towards the debate that surely must accompany the centenaries of these events, which are now just around the corner.

Why Did They Lie? The Irish Civil War, the Truth, Where and When it Began by Jack Kiernan
Non-fiction, History, Irish history, The Irish Civil War
196 printed pages with black and white photo illustrations and diagrams, paperback
First published in Ireland, in 2018, by The Manuscript Publisher
ISBN: 978-1-911442-08-0